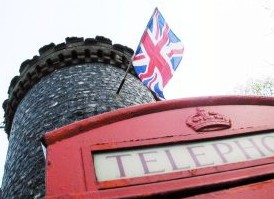 Looking for facts about England? You at the right place. :-)

The United Kingdom's National Health Service is the third largest employer in the world, after the Red Army in China and the railway in India.

Did you know that when the United Kingdom adopted the Gregorian calendar in 1752, -> 11 days dissapeared.

Cinderella is officially the UK nation's most favourite fairy tale, followed by Sleeping Beauty and Hansel and Gretel.

The only undeground station in London to be named after a footbal club is called Arsenal. Football fans used to get off at Gillespie Road.

Just when you thought it was Newport, the most popular town name in Britain is Newtown, which occurs over 150 times.

The only English place that has a name that ends with and exclamation mark is "Westward Ho!".

An English breakfast is the thing most ex-pats miss most. English cheese, marmalade and Marmite are also on the list. In medieval England beer was often served with breakfast.

The most common name for a shopping center in United Kingdom is Arndale.

The most popular name of pub in Britain is the Red Lion.

Did you know that alcoholic lemonade is outselling premium bottled lagers in British pubs.

In Scotland, seeing a live haggis is supposed to be a sign of imminent good fortune. Earl Nyaff of Uirsgeul reputedly encountered one on his way to Ayr Races in 1817 and subsequently won £50.

Villagers in Great Henney, Essex, built a decoy spire on their 11th century church to prevent amorous woodpeckers from causing damage to the original spire.

A parking space in a Cornish town sold for £16000 because spaces are so hard to come by.

About 1,6 million of British women have hair-loss problems.

The highest ever winning score in University Challenge was 520 by University College, Oxford, in 1987.

Chancery Lane has the shortest escalator on the London Underground system - Only 50 steps.

Here You Can Find More Facts About England

Do You Know More Facts About England?

Do you have more interestintg facts about England? Share it with global community!

Railway in England.  Not rated yet
England has the worlds oldest known railway system in the world. The longest rail journey is the Penzance to Glasgow train which takes 12 hours.

Interesting facts about Robin Hood Not rated yet
Robin Hood really existed. True facts about his life are largely unknown, and perhaps more interesting than we are shown on TV or in Hollywood movies. …

Interesting facts about English Currency Not rated yet
The names of many currency closely related to various measures of weight. A typical example is the British Pound Sterling called silver coins, and 240 …

random uk facts! Not rated yet
Fact NO.1. in england,while in pubs or bars, you can have drinks but you are not allowed to get drunk! Fact NO.2. in london the tube route from leiciester …

Weird Facts of England Not rated yet
The first telephone directory in England was puplished in 1880 and contained 25 names. English people drink more tea then anyone on the Earth!! Big …

The British comedies Not rated yet
Are you being served was a famouse british comedie in the uk written by david croft and jeremy loyyd. to the britians it was funny but to the the americans …

Historic Fun Facts About England Not rated yet
•The first hot chocolate store opened in London around 1600. Ironically it was started and run by a Frenchman who made it very popular to drink hot chocolate. …

Fun facts about England :) Not rated yet
- Shoelaces were invented in England, in 1790. -the average summer temp. in England only reaches about 60 degrees. - the british eat twice as many beans …

Fun Facts About England :) Not rated yet
Here are some intresting facts about england: *The Saxons destroyed London Bridge in 1014 by using boats and ropes to tear it down. Some people wonder …

Interesting facts about England Not rated yet
*In england when served breakfest you are often served beer with your meal. *The oldest zoo is located in london. *The Big Ben tower is actually …