Discover a few interesting that You May Not Know.

Unbelievable fact: A goldfish has a memory span of 3 seconds. 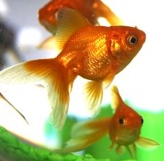 Did you know that most cows produce more milk when they listen to classical music?

Were you aware that Queen bees lay nearly 1500 eggs a day and live for up to 2 years?

The lion has the smallest heart of all beasts of prey.

A hippo can open its mouth wide enough to fit inside 2 little boys.

Elephants are the only animals that can't jump.

The cockroach is the fastest animal on six legs - covering a metre a second.

The whip makes a cracking sound because its tip moves faster than the speed of sound.

An ostrich's eye is bigger than its brain.

Were you aware that when a female fish sees a male fish blowing bubbles, it means he's ready for breeding?

It takes a lobster six to seven years to reach a weight of 500 grams.

The frog's tongue grows from the front of its mouth, which makes it easier to catch flies.

Do you have something to add? Share it with global community!

Cow Can Go Up Stairs Not rated yet
Did you know that a cow can go up stairs but not down stairs due to their joints? Also if you hold up a cow's tail it will be paralyzed. A cow can't vomit. …

10 of most famous pigs in the History Not rated yet
1. Unnamed pigs In 1784-5 nameless pig was exhibited in London named Academic Pig (Learned pig). Pig could answer the questions, choosing the right …

Interesting and Weird Animal Facts Not rated yet
They are the only animal to be born with horns. The use their tounges to pick their noses. ---

Fun Guinea-Pig Facts!!! Not rated yet
1: did you know guinea-pigs have 4 toes on their front paws and only 3 on their back paws? 2: they don't have fur, they have hair! 3: they purr when …

Lord of the Beasts Not rated yet
Recently, I was chillin watching the tube, when something came on the screen out of the ocean depths called a goblin shark. Yikes! Its mouth comes out …

The 13 Most Arduous Animal Sex Habits Not rated yet
Hi, You think YOU have a tough time getting laid? These 13 animals work for sex more than any species on earth. From drinking pee to morphing the size …

Back To Homepage from Strange Animal Facts