Discover a few bizarre facts that You May Not Know.

The average person presses the snooze button on their alarm clock 3 times each morning.

Did you know that there are no clocks in Las Vegas gambling casinos.

In Japan over 20% of all publications are comic books.

More money is spent on gardening than on any other hobby.

Every time you lick a stamp, you're consuming 0,1 of a calorie.

Walking at normal speed uses six times as many calories as writing fast.

According to French tradition, Santa Claus has a brother named "Bells Nichols".

The name Wendy was created for the book "Peter Pan". There was no recorded name "Wendy" before this book.

If all the water in the world, contained in various containers and tanks pour into the open ocean, its level rises by 3 cm

3/4 of the total water used in the home needs to flush out the toilet and taking a shower.

Forensic experts can determine the sex, age and race of the person simply examining a strand of his hair.

The majority of deaths in hospitals occur between 4 and 6 o'clock in the evening, when the human body is the most weakened.

Catholics in the world more than all the Christians together.

The world's first drugstore has opened around the year 1000 ad in Baghdad. 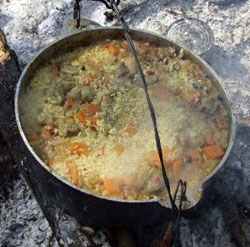 People living on the plains, spend less time preparing meals than those who live in the mountains. Thus, at an altitude of 2000 m above sea level, water boils at 93 degrees Celsius. And to cook potatoes on top of Mount Everest, you need to be patient. The water is boiling at 70 degrees. And with a boiling point of water the food is prepared for longer.

A person who smokes a pack of cigarettes a day, drank half a cup of tar per year.

Back To Home from Bizarre Facts

Do You Know More Bizarre Facts?

Did you know that Santa Claus is not real, he has no brother, no sister, no mum, no dad and no wife,he has NO family at all because he does not exist.If …

Cleopatra Not rated yet
Did you know that Cleopatra was actually Greek and not Egyptian. -- Over two thousand years after death of Cleopatra still people have some arguments …

Interesting facts about Insects... Not rated yet
Did you know that you eat insects that weigh a pound altogether without even knowing it?!

Interesting facts about Donald Duck ???!! Not rated yet
Donald Duck comics were banned from Finland because Donald doesn't wear pants.

Interesting fact about Disney World Not rated yet
Did you know that if you slept in every disney world hotel room across the world every night, it would take you 68 years to sleep in them all.

Unlucky tycoon  Not rated yet
In 2006, tycoon Steve Wynn, the casino owner in Las Vegas, has just agreed to sell Picasso's "The Dream." And right away, stumbled, fell into the canvas …

Penguins...... Not rated yet
Did you know suprisingly there are no penguins in the north pole! So any pictures you find of merry little santa with a penguin by his doorstep - you can …

Bizarre Facts  Not rated yet
Most Lipsticks Contain Fish Scales --

List of Bizarre Facts  Not rated yet
Did you know that Donald Duck comics got banned from Finland because he dosen't wear any pants !!!