Discover a few animal facts for kids that You May Not Know.

Did you know that dolphins always sleep with one eye open?

The tongue of a blue whale is as long as an elephant.

Were you aware that in a fight between a bear and a lion, the bear would win.

If you will keep red goldfish in the room without light for quite a long time, it will turn white naturally. Also you should know that dry fish food can make your favorite goldfish constipated.

A house fly lives about 14 days.

The longest recorded flight of a chicken lasted 13 seconds.

Chickens unable to swallow food while they are upside down.

Duck's quack doesn't echo, and nobody knows why.

Most stupid domestic animal is the turkey.

Snakes hear through their jaws. 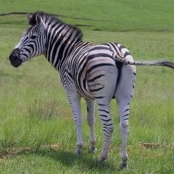 No two zebras have the same pattern of stripes.

Did you know that all bulls are color blind animal.

Male mosquitoes are vegetarians. Only females bite humans. They also have 47 teeth.

A dog was the first in space and a rooster and a duck were the first "pilots" in a air balloon.

Leaf-cutting ants can lift and move loads, weight kotoroya 50 times its own weight.

The mass of the elephant`s brain is approximately 0.27% of the mass of its body.

In each beehive live 20 - 60 thousand bees. The Queen bee lays almost 1500 eggs a day and lives up to two years. Drones, the only work which helps the uterus to live up to 24 days and do not have stingers. Worker bees (all sterile females) - usually work until his death (about 40 days), collecting pollen and nectar.

Back To Homepage from Animal Facts For Kids

Do You Know Any Animal Facts For Kids?

Do you have something to add? Share it with global community!

Ants are arguably the most perfect creatures on Earth: the animal with the largest brain in proportion to its size is the ant. They were even farming and …

The heaviest cat was 46.8 lbs.The lightest cat was weighed 1 lb. 0.8 ounces. The smallest cat was 6.1 inches high. The married couple with the most cats …

cheetahs Not rated yet
The cheetah is also known as the hunting leopard.cheetahs are the fastest mammal on land.cheetahs can reach speeds of 60 or 70 miles.

Bulls Are Not Angry At The Color Red Not rated yet
A study actually found out that bulls are attracted to many colors such as red and yellow. It just depends on how the color is moving and if the color …

DId you know that hippo milk is pink? Not rated yet
I was reading a book and there was a hippo and it said what color is hippo milk? Some answers were white, yellow (Ewww!),or pink. I thought white, but …

Chameleons Not rated yet
chameleons tongues travel at 13 mph. Chameleon tongues are VERY long and fast. They can be anywhere from one to 11/2 times the bodylength of the owner …

The small-armed T-Rex Not rated yet
A T-Rex's arms were so small, it couldn't even scratch it's own nose!!!

Crocs and Sharks Not rated yet
It is actually possible for a crocodile to swallow a shark. Not whole, though...

Interesting Fact About Elephants and Blue Whales Not rated yet
Elephants are the largest land animals, but they are 30 times smaller than Blue Whales!

Butterfly Facts Not rated yet
Butterfly only see the colors red, blue and green.Other colors is black and white

South African Crickets Not rated yet
South African crickets can shoot blood and vomit from their insect armpits when they feel threatened. Som more facts about Crickets. The sounds of …

Interesting facts about Smart Pigs! Not rated yet
Pigs are the fourth smartest animals in the world! Pigs can recognize it`s own name within a few weeks after it born. They are only outranked by elephants, …

Interesting Facts about Cockroaches Not rated yet
Cockroaches can live for up to two weeks with their heads cutt off (It diesdue to lack of water)! Interesting that cockroaches have white blood! They can …

Insteresting facts about Snails Not rated yet
Did you know that snails can sleep up to 3 years. Snails are one of the earliest known types of animals in the world. They evolved more than 600 million …

Interesting animal facts for kids Not rated yet
Did you know that a baby Giraffe is 2m (6,56 feet) tall at birth

SHRIMP heart location Not rated yet
A shrimps heart is in its head. Shrimp is considered to be seafood. There are differences between crayfish, prawns and shrimp. Shrimp come in many …

Top 10 Untrue Myths About Animals Not rated yet
Hi, People will believe any old wives' tale without a moment's hesitance if enough people tell them it's true. To counteract this phenomenon, we've …

Animal Facts for Kids Not rated yet
Did you know that rabbits can swim? They can!

Interesting facts about Crocodiles Not rated yet
Crocodiles sleep with one eye open. Crocodiles seem to sleep a lot - but do not be fooled because very often they only appear to be sleeping. Where …

Interesting Facts about Polar Bears Not rated yet
All polar bears are left handed! Paw pads with rough surfaces help prevent polar bears from slipping up on the ice. Actually the fur of polar bears …