Interested in Puffer Fish Facts? All kind of fish that are in the Tetraodontidae family should be considered as Pufferfish (also known as blowfish). There are over 120 species of Pufferfish. To evade predators they can inflte into a ball shape. They pump in their elastic stomachs huge amount of water to increase size of their body. 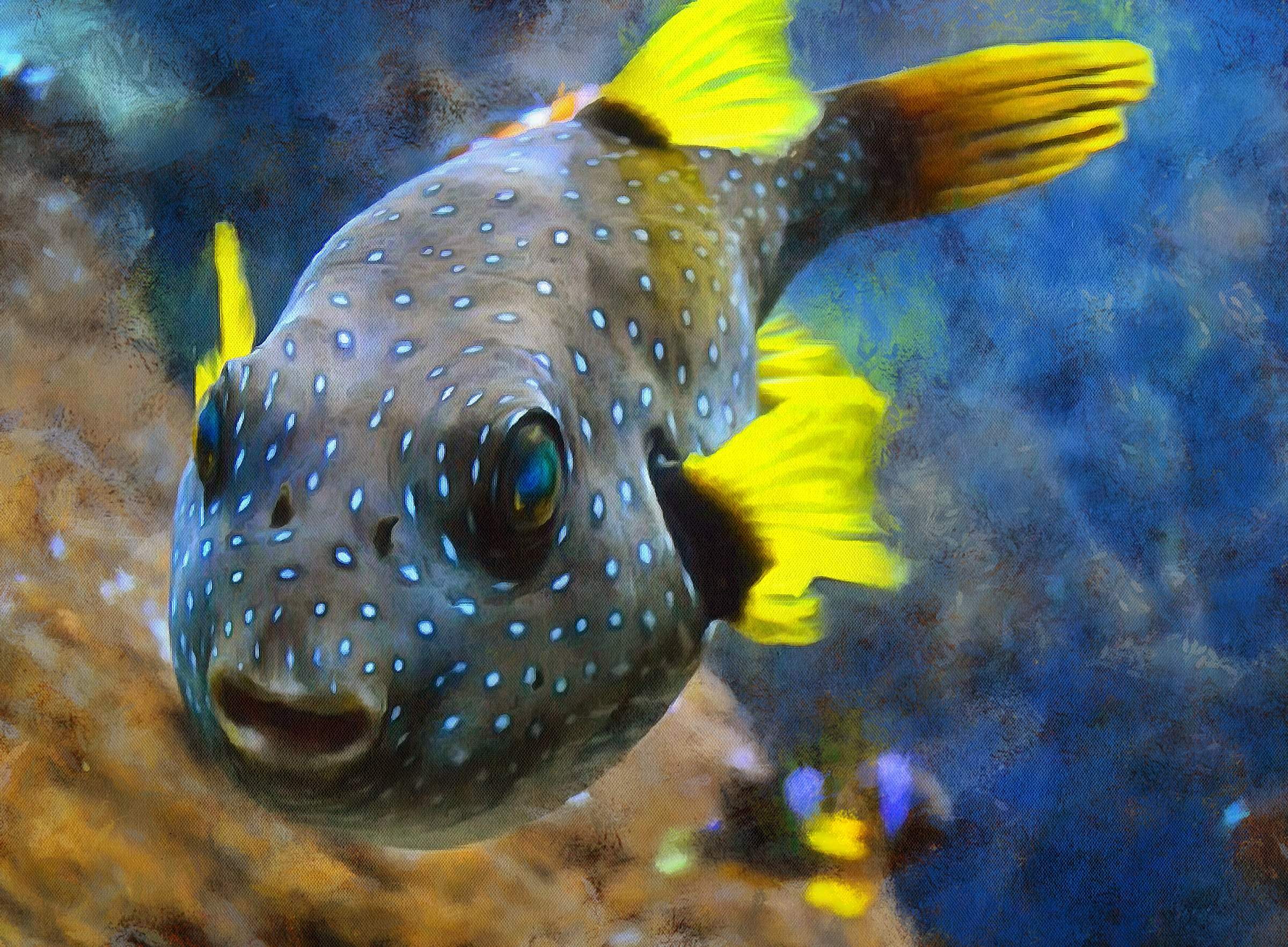 Sometimes referred to as a dog-fish or fish fugu. Small in size and truly amazing fish has become known to many people due to the most dangerous dishes cooked by Japanese chef cooks.

Puffer fish - bottom fish found at depths up to 100 meters.

The fish can reach a length of 80 cm, but its usual length - 40-50 cm on the sides and behind the pectoral fin body is decorated with black round spots with light rims..

In times of danger fish swells and increases in size by almost 3 times. It becomes like a balloon, and the spines are transformed into sharp spikes. This is possible thanks to the special bags in the abdominal cavity, which fish fills the water (or even air). 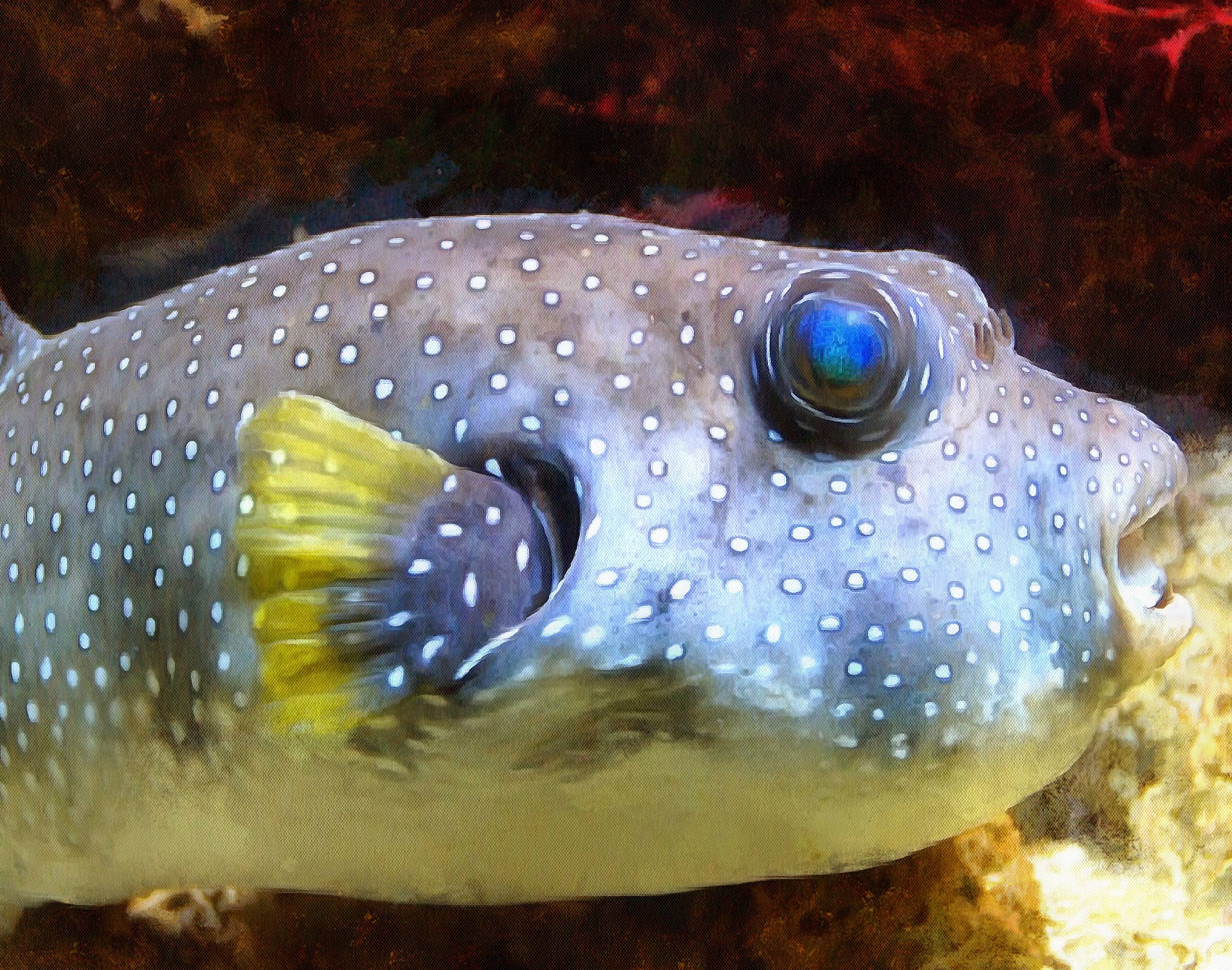 Puffer fish facts: Compared with other fish, puffer have virtually no bones, no even the edges.

This fish has a good vision. And her sense of smell even better, under the eyes it has small tentacles with nostrils, in which a plurality of receptors are located. Teeth from fish grown together, resemble a pair of powerful incisors, located above and below.

An unusual way to attract female

Not long ago, the scientific world was struck by shots of circles on the sandy bottom. Patterns of regular geometric shapes look very beautiful and fascinating.

As it turned out, they were created by small fins of puffer fish. Japanese photographer managed to photograph a male at work. During the day and night, he tirelessly swam along the bottom, creating the pectoral fin patterns. And all these efforts are only needed for one to attract a female.

Capricious lady will choose a gentleman with a most complicated pattern, and leave the eggs after mating in the very center. Selection of the circle, it's not a fad, if it is done correctly, it will not flow blow left in the middle of the calf. 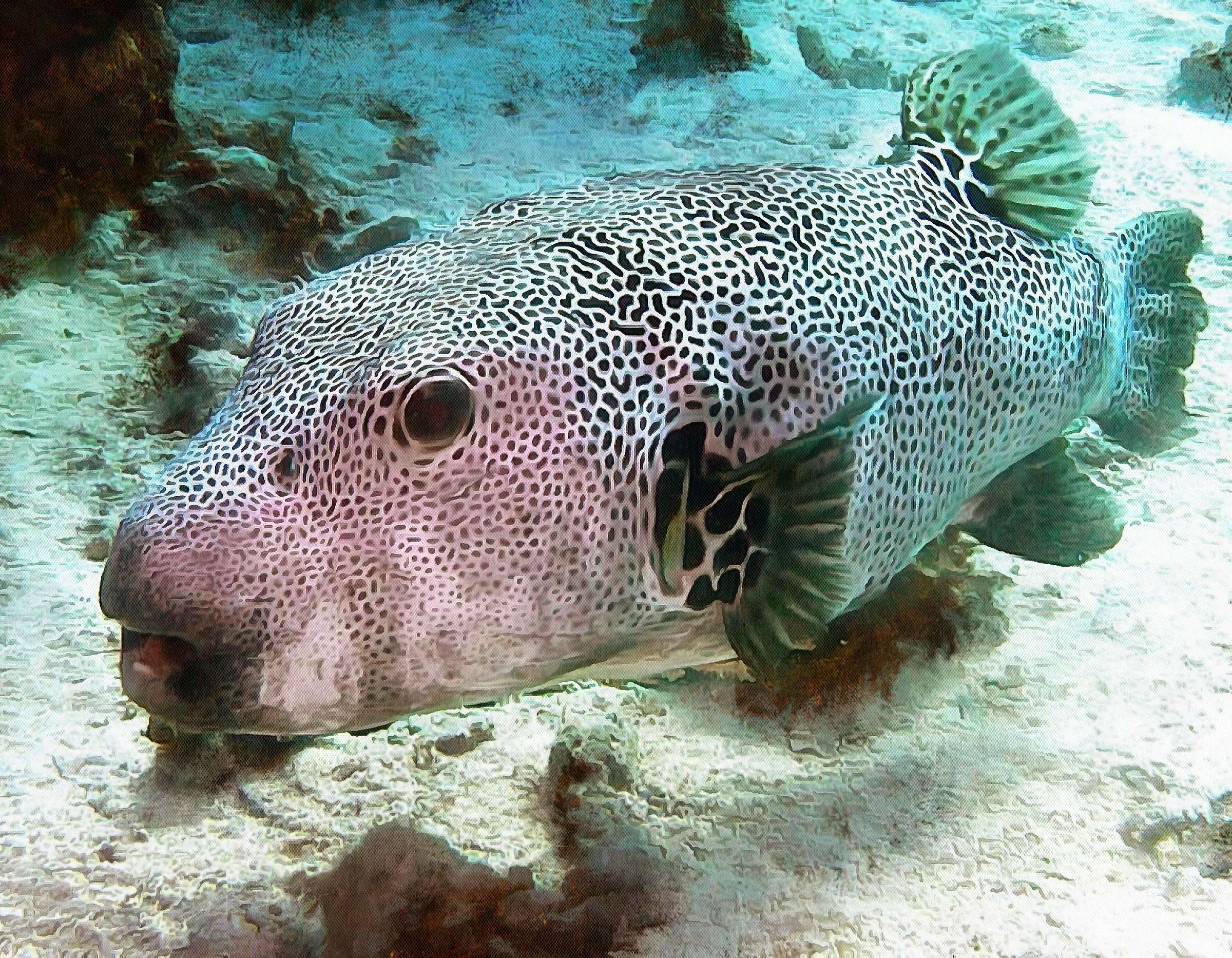 Fish-fugue - a legend of Japanese cuisine, and it's not just that its meat is very tasty, but also that it is fatal. Almost all the fish body is saturated with tetrodotoxin, which is 1,200 times stronger than potassium cyanide and 400 times the poison curare, besides, there is no drug to neutralize it.

The liver and ovaries of puffer fish are very poisonous, meat, skin and testis does not contain poison.

200 years this delicacy was banned in Japan. Despite the high skill of cooking, the meat of this fish kill about 20 people a year, for example, the 3100 poisoning and 400 deaths were recorded in the 50s, and in the 16th century there was a case when the fish appetizer destroyed the entire army! After this accident the dish was banned in Japan. But in the early 18th century Japanese emperor tried the meat and fish was so impressed that lifted the veto.

The most famous death from fugu happened in 1975. Legendary actor Kabuki Mitsugoro Bando the Eighth, who was called a "living national treasure", died of paralysis after eating fugu liver in one of Kyoto restaurants. It was his fourth attempt to try a dangerous course.

The restaurant owner who retail food from fugu, is obliged to provide detailed reports to the Ministry of Health on the number and conditions of storage of stocks of this fish in its restrane. Cutting Puffer - unique art, which need a long time to learn, and only few chefs can do it.

To obtain permission to prepare puffer fish, the cook must obtain a license, the master must not only undergo training, but also eat cooked meal. So, the bad chefs in Japan have little chance of survival. 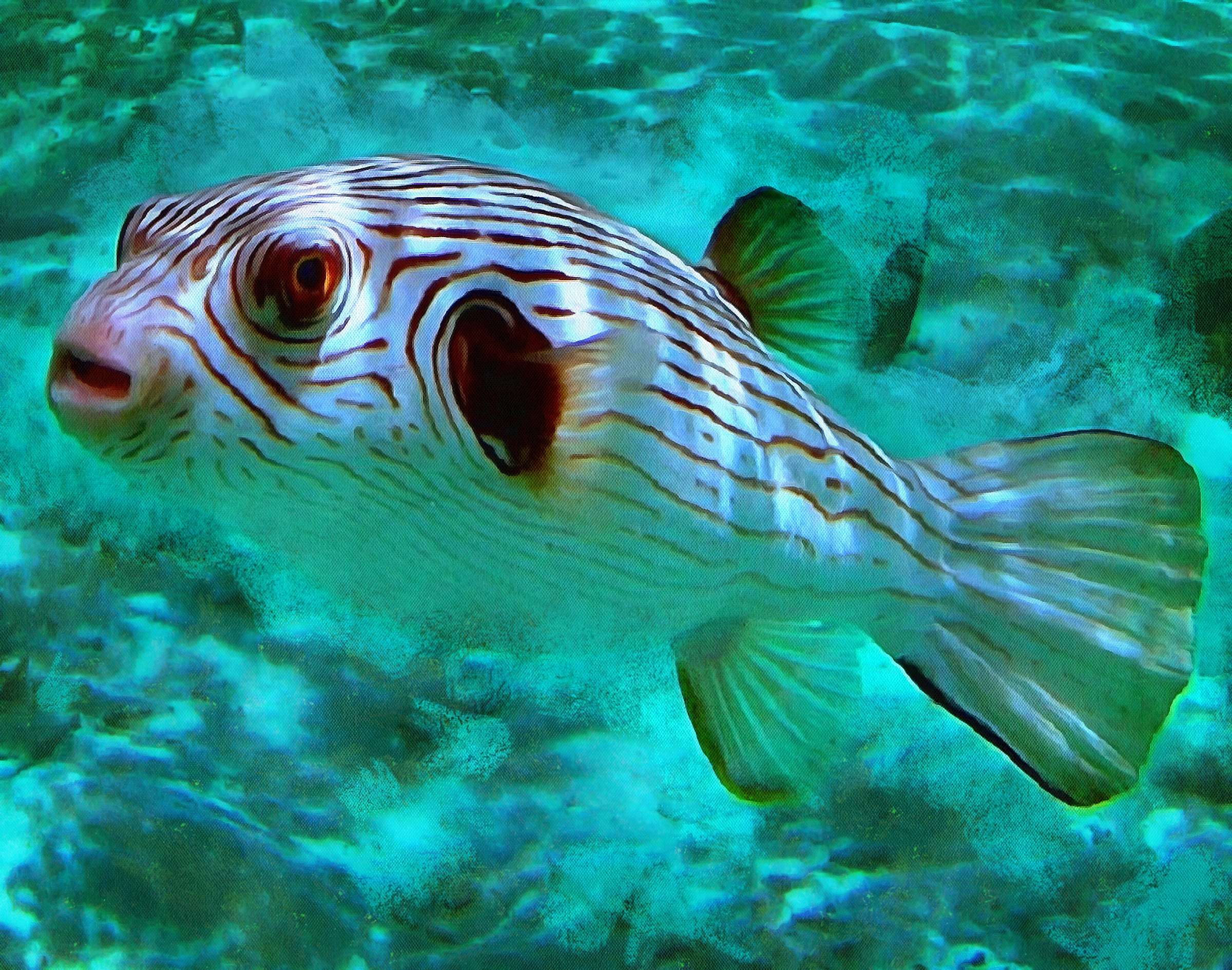 The recipe is very simple. We need to get all the fish entrails and its very Carefully rinse. Fish fillet cut into the thinnest slices and serve them on a platter to the table.

Culinary skill evident in the ability to leave a little bit of poison, it Senses danger gourmets love. The low concentration of the substance adds severity, causes mild numbness palate, tongue and limbs, as well as intoxicating, state something similar to drug intoxication.

No wonder that the price of such goodies range from 100 to 500 dollars per dose. One of the most famous dishes of the fugue - fugusashi. Pearlescent slices of raw fish stacked petals on a round platter. chef often creates pieces of the real picture: scenery with butterflies and flying birds. 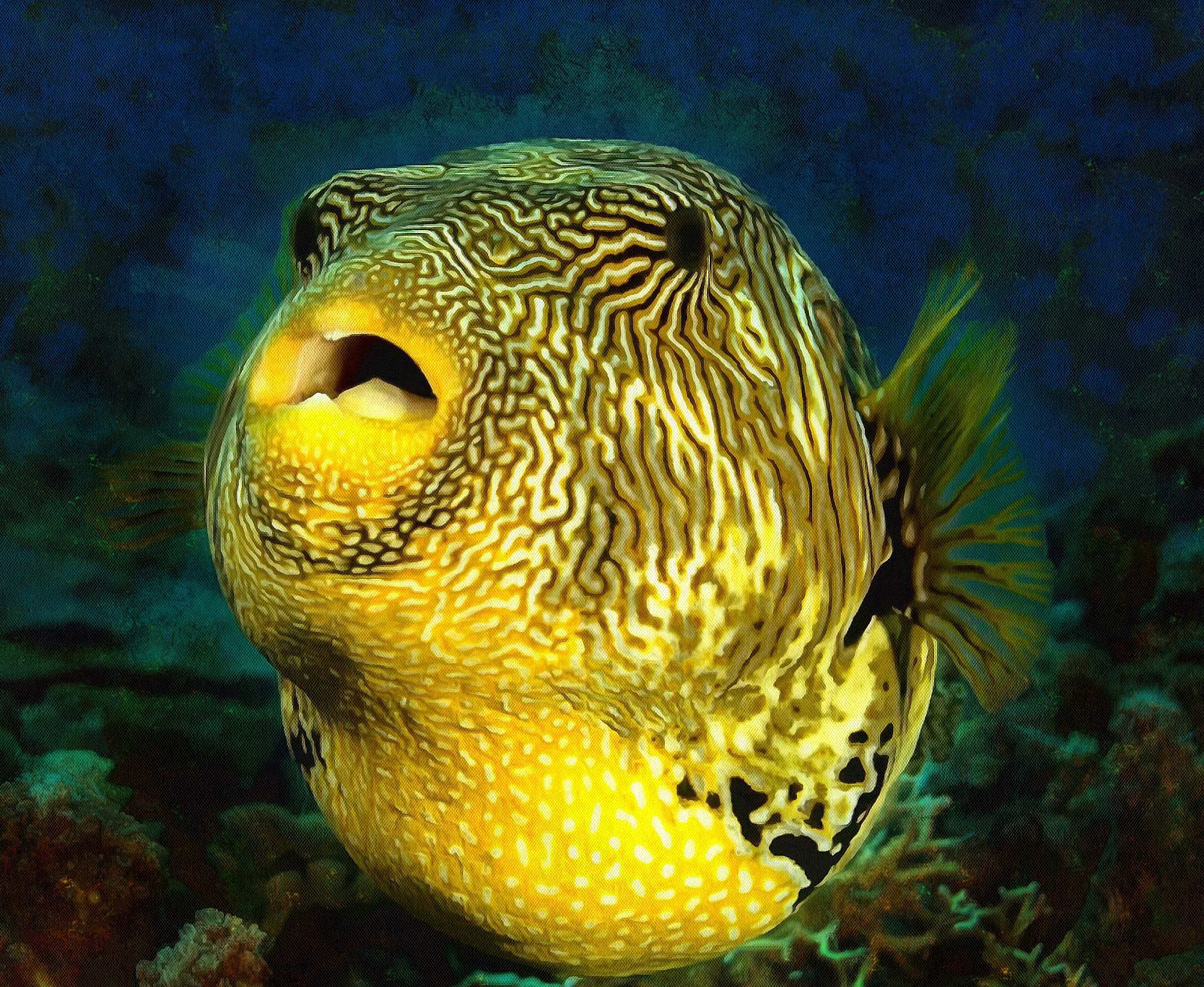 Puffer fish is usually eaten by dipping the slices in a mixture of ponzu (vinegar sauce), asatsuki (chopped chives), Momiji-watered (grated daikon radish) and red pepper. Typically, customers who come in special restaurants, bought only a fugue. The meal begins with fugusashi, followed by a fugue-zosui - soup broth Puffer in the ornament of rice and raw egg, and lightly fried slices of the same fish.

Puffer fish facts: Slices of fugu served in strict order. Start from the back - the most delicious and least toxic, and then approach the peritoneum - the place of the main concentrations of the poison. The duty of a cook - vigilantly monitor the status of guests, not allowing them to eat a large dose of poison. To do this, you must not only know the intricacies of cooking this dish, but also have medical knowledge, since the intensity of exposure to the poison depends on the body type, temperament and even the client's skin color.

The biggest mystery puffer fish - why people go to a deadly risk. Fans of extreme cuisine say that the taste of the fish resembles a Japanese painting on silk - something subtle, elusive and smooth. Kitaodzi Rosannin, creator of exquisite ceramics, wrote: "The taste of the fish can not be compared with anything. If you eat fugu three or four times - you will become a slave to a fugue. Anyone who refuses to try this dish out of fear of death, worthy of deep sympathy. " 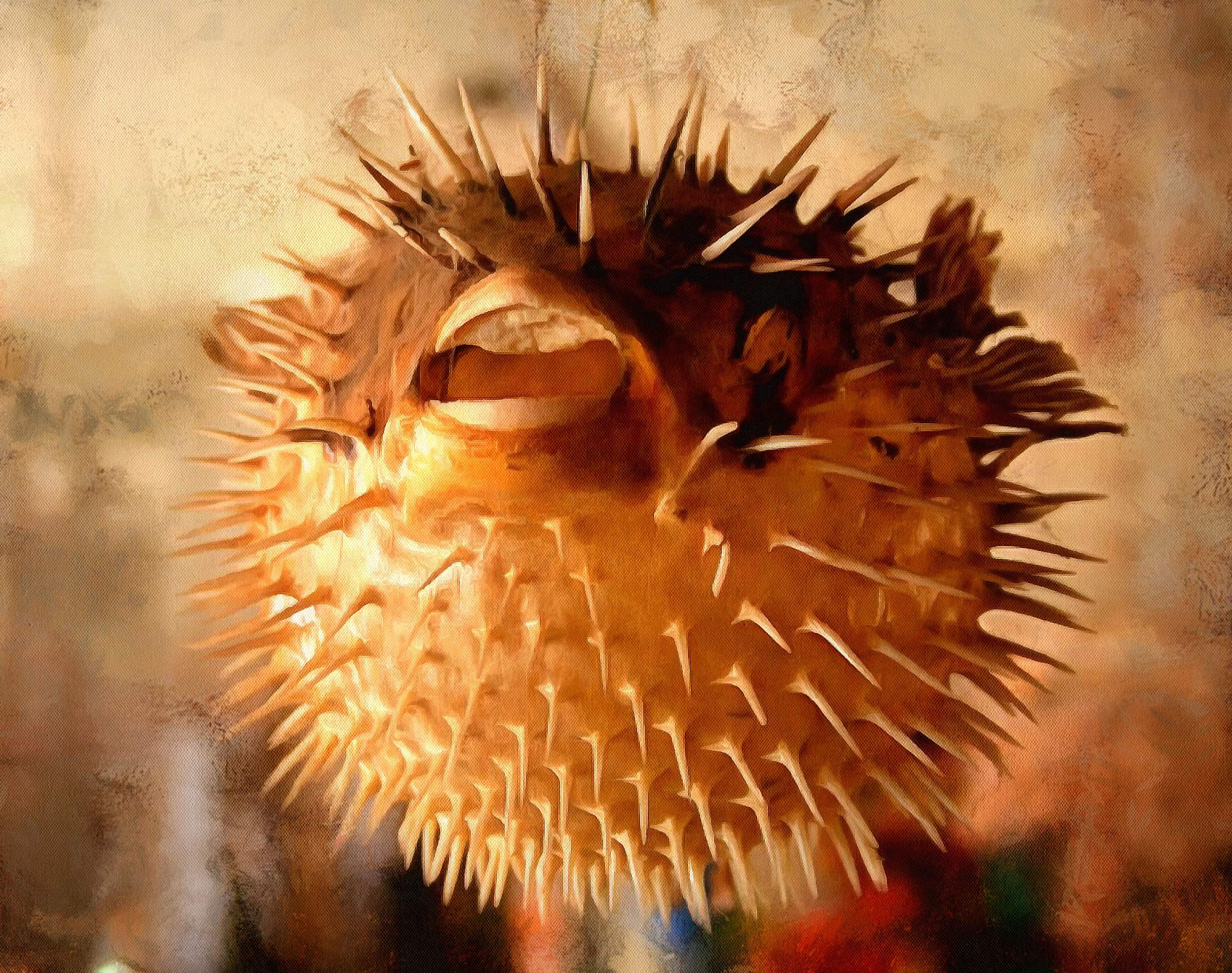 All the matter in a special relationship to death. Japanese samurai thought: departure from life - is the apotheosis of beauty. Fugu allows you to touch the Japanese understanding of perfection. Not long ago, an extremely proud scientists announced that brought non-toxic puffer fish.

It turns out that the secret lay in the natural diet of the fish. Fugu does not produce toxic substances in their own body - it becomes toxic, by eating poisonous starfish and shellfish. If birth to land Puffer on a diet, you get a completely secure inhabitant of the deep sea. However, the expected sensation did not happen. Indeed, without his puffer fish toxin it becomes simply another variety of fish - quite tasty but not anything special. No wonder that in the spring, when the puffer is considered the most toxic, gourmets pay the highest price.